Sohail Naseer said “I have a passion to serve as a volunteer for the betterment of the community.” Friend and fellow Rotarian, Ries Boers said that he is “so proud of Sohail on his nomination to District Governor of Southwestern Ontario. Sohail has worked very hard for the Milton Rotary Club and together with his wife Rubina they never fail to step up to the plate to assist or run an event!” 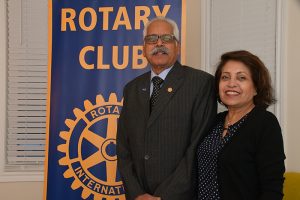 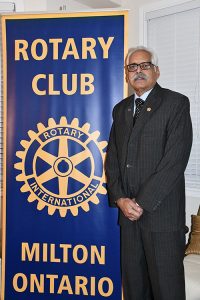 “This is a huge task,” explained Ries,“ our district contains 50 different Clubs from Ingersol to Oakville to Orangeville and many in between. My good friend, Mike Ledwith, who passed away in 2009, was the Mayor of Milton, a chartered member of our Rotary Club and a businessman who owned Quality Greens that stood for many years on Main Street. We will all help Sohail to fulfill his commitments to the district. It will be an exciting year for our club and hopefully add new members to the Milton Rotary!” Sohail Naseer grew up in Pakistan and in 1979 he obtained a Degree in Civil Engineering. He worked as a Construction Management professional. He joined Rotary in 1995 in Karachi, Pakistan. He migrated to Canada in 1996 and joined the Rotary Club. In 2003, with his wife Rubina, his two daughters and son, they made their home in Milton.

Sohail said “My Experience as a construction management professional with expertise in controlling the finances came in handy and that brought me to be selected by the District as Director of Finance. I have been Treasurer of the Rotary Club of Milton since 2015.” He has now been selected as District Governor for Southwestern Ontario for the Rotary year 2024-25 and will be trained to take the helm. “Before taking charge I have to go through a very rigorous process” he explained, “to learn more about the Rotary International and District Functions. “I am the second Member of the Milton Club to be selected as District Governor since 1947 when the club was chartered. I have to follow in the big shoes of the late Mike Ledwith, District Governor in 1964-65.

“We are celebrating in January 2022 the 75th Anniversary of the Club and I invite everybody to join us in the Celebration of the Rotary Club of Milton.”

Milton Rotary was chartered on January 22, 1947 by business and community leaders, including Milton’s Mike Ledwith, amongst many others. A significant number of those original 14 charter members were veterans of WWI and/or WWII, and many owned and operated businesses along Main Street at that time. Over the years, Milton Rotary has raised $$ for many community projects: In 1951 Rotarians purchased the land where Rotary Park is now situated in downtown Milton; 15 acres for $1,000 (nearly $10,000 in 2019 dollars). The park, located north of Mill St., is presently home to three baseball diamonds, tennis courts, a playground, splash pad, gazebo and the Rotary pool.

The group has been internationally involved too, helping communities in India and Africa, Mexico, Philippines and South America. On 10th April, 2021 Milton Rotary organized the international Rotary Youth Summit (RYS) on Zoom, involving more than 150 attendees from Ontario, Uganda, Nigeria and St. Lucia. “As Miltonians and fellow Rotarians,” said Rod McLachlan, “I cannot understate how proud of Sohail we are for this honour and accomplishment, which will bring acclaim and prestige to Milton throughout this region and beyond. This is a massive commitment and undertaking by Sohail and Rubina, and we intend to support them towards our collective goals of fun, networking and service at home and abroad.”

Sohail’s wife, Rubina Ali (Milton Rotary’s current Secretary and to be the club President in 2023-2024) added a heartfelt message: “Next year it will be 40 years that I have lived with Sohail. From day one the trait most pronounced in his personality was respect for others especially people senior to him in age. He is always toying with some visionary idea for the greater good of the organization,

group or anyone that he is associated with. He is intelligent with a higher Mensa score than most people. I am so grateful to be his wife because he treats me like a queen.”

Thank you to Rotarians: Rod McLachlan, Ries Boers, Sohail Naseer and Rubina Ali for their contributions to this article.

Ruck to Remember comes to Milton!

Zeeshan Hamid It’s time for more than houses and warehouses