Yun Xie is a member of the Fine Arts Society of Milton and also a member of the Shanghai, China Folk Artists Association. She is well known internationally for her exquisite paper-cutting creations. Paper cutting is one of the oldest, most popular folk arts in China and a traditional part of Chinese culture.

“This intricate art form originates from China and is a precious intangible cultural heritage of the Chinese nation” Yun declared, “As one of a new generation of Chinese paper-cut artists, I am committed to combining traditional elements with new ideas to show the unique charm of paper cut art and make this ancient Chinese culture go further to the world.” Her designs represent nature by using mostly animals and flowers.

Fifteen years ago Yun Xie moved to Milton from her home in Shanghai, China. She has shown her art in numerous FASM art shows. In December, 2018 Yun had a solo papercutting art show in the Town Hall of Milton. Her talented daughter, Ella, graduated from Sheridan College Illustration in 2020 and is now a freelance illustrator. Yun taught herself to cut paper and make paper designs when she was 7 or 8 years old. She said: “Paper cutting originated and is very common in China. It is often used to decorate marital homes and wall & window decorations during Chinese New Year. I was heavily influenced by this art form. At a very young age, I taught myself and practiced papercutting with traditional Chinese patterns. At that time, we didn’t cut the paper with a knife, we used scissors,that is the most traditional form of paper cutting.” 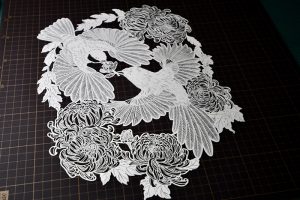 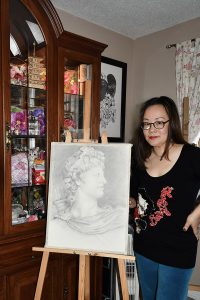 Yun mostly uses white watercolor paper for her pictures. “The first step” she said, “is to conceive the idea, then I sketch it out, and finally cut it with a exacto knife. Generally, a letter-size artwork takes about 4-5 days to finish.”

She also likes to draw digitally with a drawing tablet. After each piece of paper cutting, she re-creates it with digital illustrations which she uses to print on postcards and fabrics to make beautiful, delicate little purses.

A customer commented on Etsy: “Yun’s handiwork on this purse is absolutely stunning. The bag is beautifully made. You can tell Yun loves what she does. I look forward to carrying this exquisitely made purse; it really is a work of art. And I appreciate so much the included cross stitch card–WOW. Even the packaging was beautifully done. Opening the box was like opening a gift. Thank you, Yun, for creating such loveliness to brighten our lives. Her work is very affordable, too, by the way! “ On Etsy Yun says: “All my handmade artworks are very delicate, so please handle them carefully. I put my heart and soul into it. “

Yun has an online shop at: Etsy.com/ shop/yunart as well as a shop on Instagram at: yunpapercutting. Yun’s website is at: yunpapercutting.com Yun Xie : “‘Seeing the world between square inches, there is a universe in the subtleties.’ This is the inheritance and innovation of Chinese traditional culture.”