The 9th Annual Milton Film Festival came back, in a somewhat different form than had been planned just a few weeks ago. Due to the ongoing closure of the First Ontario Arts Centre Milton, and now all theatres in Ontario, festival organizers have had to adapt and go with an all virtual format for a second year in a row.

“We were really hoping to give our audience a theatrical movie-going experience once again, even arranging to show films in Georgetown. But this latest COVID wave means that won’t be possible just yet” explains festival founder and director Jennifer Smith. “Fortunately, our virtual festival platform Eventive makes it relatively easy for us to pivot from hybrid to virtual mode. Everyone seemed to have a very positive experience with it last year – especially since it allows people to attend without having to travel, and to watch films on their own schedule.” The Festival kicked off January 29th with all 14 feature films being rolled out over nine days until February 6th: 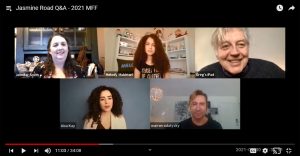 As always, the festival showcased a wide selection of short films by local and regional filmmakers, including two from MFF alum Roozbeh ‘Ray’ Noori (The Philosopher King), as well as Devotion, shot in Halton Hills by Georgetown native Matthew Hard staff, and Negative Spaces, a short documentary about Milton artist Robert Attrell. Many films will also feature interviews and Q&A sessions with special guests.

Tickets and passes are available at miltonfilmfest9.eventive.org.

Ruck to Remember comes to Milton!

Zeeshan Hamid It’s time for more than houses and warehouses