On the 13th of April, the Milton Muslim Moms organized their Annual Interfaith Iftar Dinner. This event used to gather four hundred people before the pandemic hit the world, this year it saw a hundred and forty guests at the Milton Seniors Center. Some of the noted members of the Milton community at the event were Mayor Gordon Krantz, MP Adam van Koeverden, Councillor Rick De Lorenzo, Councillor Sameera Ali, Councillor Kristina Derksen and Councillor Mike Cluett.

The holy month of Ramadan is observed by Muslims worldwide as a month of fasting, prayer, reflection and community. During Ramadan,Muslims fast from sunrise to sunset. Iftar is the evening meal with which Muslims end their daily Ramadan fast at sunset. This year’s Iftar dinner saw community leaders of different faith also attending the event. In his speech, Rabbi David Mivasair said, “Why did God start the world with just one couple and not ten million couples? Well, that was because he wanted everyone to have the same shared beginning and same family so there would be no discrimination of any kind.”

We spoke to Milton Muslim Mom President Maliha Khan Ahmed about how the organization was formed. She says, “Milton Muslim Moms started as a Facebook group in 2015 and then we registered as a Not-for- Profit organization in 2016. Our organization’s main objective is to empower women from all walks of life not just to support themselves but also to help them mould and create a better society.”

Besides the Interfaith Iftar Dinner, the Mulsim Milton Moms host a fundraising dinner where a worthy local organization gets the proceeds of their event, some of the past recipients of the proceeds are the Milton District Hospital Foundation and United Way Halton and Hamilton. 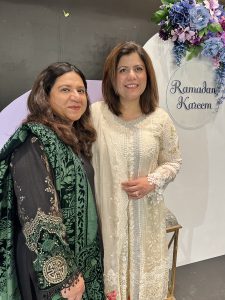 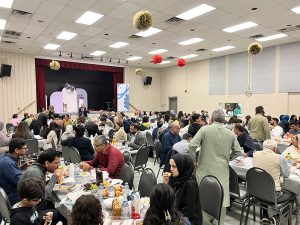 “In the past, we’ve worked closely with United Way – Halton and Hamilton, Big Brothers and Big Sisters, Food for Life and also helped the homeless in Toronto with Team Nobody. During the pandemic, we have done several food drives including providing 200 grocery bags to needy families in the GTA. We have held workshops such as paint nights, candle making and the Little Merchants funfair where children got an opportunity to display their amazing business acumen and talent. For the past year, we have had a regular bi-weekly free halal meals program, where we provide free hot meals and basic groceries to families in need in GTA with the help of our partner Food for Life and the generous donations of our members” explained Ahmed.

Iram Amjad, who was the emcee of the event, thanked all the volunteers for their dedication and the sponsors for providing their support.

THE MILTON PLAYERS RETURN TO THE STAGE