The famous Jagannath Puri Rath Yatra, also known as the Festival of Chariots, is believed to be the world’s oldest and largest chariot procession. Jagannath is another name for Lord Krishna. Once a god’s deity is established in a temple, it usually is not moved. Lord Jagannath is one of the rare deities taken out of his temple each year for a procession where it is said, he visits His devotees, and the public welcomes Him in the streets. The Ratha-yatra showcases the Lord’s love for His devotees. Milton’s ISKCON temple held its 3rd Festival of India on June 26th, 2022.

The International Society for Krishna Consciousness is popularly called ISKCON. It also is referred to as the Hare Krishna movement. ISKCON has more than five hundred major centers, temples and rural communities, a wide variety of community projects, including FOOD FOR LIFE, and millions of congregational members across various countries. ISKCON’s Milton branch started in the year 2017.

The Festival of India, as ISKCON refers to it, was a grand event and a green one, relying entirely on solar power. Five hundred people attended the event. The cultural programming started by welcoming the guests of honour MPP Parm Gill and Councilor Rick Di Lorenzo by ISKCON Milton president HG Bhakti Yog Prabhu.

The procession went up to Martin Street, and after this, the cultural programming included instrumental performances of the flute and guitar performances. The dances included Odissi and Bharatnatyam, with a few bhajans being sung.

Shikha Dhigra of ISCKON Milton says, “We meet every Sunday at the Grace Anglican Church, and its doors are open for everyone in the community. Our programme provides an opportunity to learn about the lifestyle and culture of those who practise Bhakti Yoga and follow the BHAGAVAD GITA. A delicious multi-course vegetarian meal is served. Other programmes include music, chanting, dance, spiritual discourse, and discussion.”

Vipra Nayyar, a Milton resident who also performed at the event, says, “Events like this allow children to connect to their parent’s cultural and religious heritage. We are grateful for all the wonderful cultural activities our town and organizations like ISKCON have to off er us.” 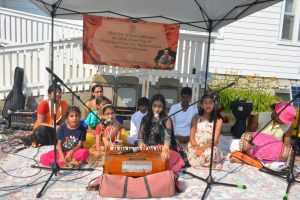 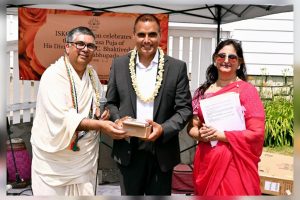 Milton Youth Zainab Azim chosen by Town of Milton to ring in the New Year!