Miriam Haight believes that the time is now for a hospice here in Milton. After 29 years of loving and living with Peter, his time had come to the end. He was losing his twelve year battle with C.M.L., He was moved to a Hospice in Oakville where he was very well cared for as was Miriam, but it was a hardship to travel so far to be with him in his final hours.

A Celebration of Life, to remember Peter Haight was held on January 12th 2019 at Southside Church on Main Street.

Many people who loved and respected Peter filled the room. Fond memories of days of laughter, tears, daring adventures and youthful exploits were shared with the crowd. Photos of happy times with friends and family were shown on screens around the room as Leonard Cohen’s music, played on each morning of the Farmer’s Market, at the Gallery lent atmosphere.

Great friends of Peter recalled how he loved to talk with them about philosophy, art and life.

He set up a weekly group where they studied Eastern and Western spiritual beliefs and principles. Peter would always say “Believe what you believe with all your heart and soul, and keep an open mind”

He believed in the afterlife and told them “I’m ready: when it happens I’m ready.”

Memories at the event were shared of Peter on a motorbike “a la Titanic”, being pursued by police through a graveyard and landing in a deep pothole.

Many said that he was always good to talk to and there when they needed him. He opened so many doors.

His sister Ruth remembered how “he could do anything” he set his mind to.

Peter’s son David shared that his dad was a sort of ‘King of Kensington’ who “besides building relationships with people, he liked to build…. He was a ‘Field of Dreams’ kind of man- build it and they will come- or they will build it! He was a charmer, dreamer, flirt, a ladies’ man.”

The Gallery on Main Street was a permanent venue where the public could enter and be inspired by art from Canada and the World. The displays were stunning and Peter was always friendly, welcoming and ready to have a conversation. There was a place for some local artists to show work. Well known artist Ann Kornuta, whose art can be seen along the Main Street and in the Mall, was given a spot outside the Gallery for her to paint on Saturday mornings during the Farmers’ Market, as was Sarah Joncas, an Internationally known artist for her work in Pop Surrealism.

Tom Dietrich, whose work was shown in the past at the Gallery recalled how he displayed a memorable large cut out of himself (naked, but cunningly disguised behind one of his sculptural works), in the window of the gallery to promote his art show.

One of Peter’s friends, local author Ron Base often displayed his novels on a stand outside the Gallery on summer mornings at the market. Quoting from Scaramouch he said: “Peter ‘was born with the gift of laughter and the sense that the world is mad’ He had a magical spirit that kept him going… Rest well old friend. You are loved.”

The Townsend Smith foundation, a local not-for-profit charity has been working for years to build a hospice here in Milton. The Foundation was started by Janet Townsend after the death of her husband. She was later joined by Lyndon Smith after the death of his wife, well-loved Tai Chi teacher Tessie Smith.

“We would like to honour the memory of Peter by giving back to the community he loved“ said Miriam  “His generous nature gave to those when needed, either by financial contribution or his time. He loved living in Milton, ran for Town Council and served on many boards…. I know in his heart he wanted to do what was best for our community.”

In Peter’s memory, Miriam is asking Miltonians to help raise funds for the Townsend Smith Foundation that is striving to soon build a hospice here in Milton.

More than $1250.00, has been raised so far on the go fund me.link specifically in memory of Peter Haight that you can access at;  gofundme.com  and search:  Remembering Peter.

For the Townsend Smith Foundation you can donate now at:

Both will be combined for funding to build Milton’s Hospice. 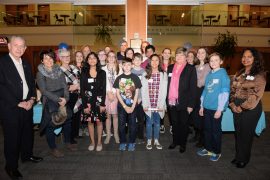