The red carpet was rolled out for Milton’s movie lovers January 25-27 for Milton’s sixth annual film festival.  January 25, 2019 marked one of two galas with Colette, a movie starring Keira Knightley and Dominic West.

One big change to the film festival was its host.  Author/ Film Critic Ron Base served as its original host for five years chose not to return for the 2019 edition.  His replacement is former Journalist and self-described film buff Indira Naidoo-Harris.  “She has fit right in with our festival family and we are thrilled to have her,” Festival Director Jennifer Smith said.  Naidoo-Harris served on the board of the ReelWorld Film Festival.  The line-up held a wide variety of films including The Rider, Black ’47, and Tea with the Dames; a documentary following four fabulous British dames as they gather in the country to catch-up, and reminisce over old times.  “These are films you won’t see at the Cineplex, that you don’t want to see from a tiny screen on our couch. “

Film student Joshua Casale got passes to the film festival as a Christmas gift.  Two of the movies he looked forward to were The Rider, and Three Identical Strangers.  He believes the themes that resonate with people are what keep bringing people back. “The classic heroes’ story, going on a journey and then coming back alive.  The story that they have to tell, and all the things that they’ve learned.”  Casale sees it as escapism.  “It’s just whatever you’re feeling.  You just turn your brain off and go into whatever it is you’re feeling,” he said.

The festival also features a series of short films from Milton area film-makers.  Steven Bascombe made one called Choices, screened with the Saturday afternoon feature The Rider. The program describes it as a movie that “follows a man who is getting ready to do something stupid, but then realizes he is about to make a mistake.”  Bascombe directs and stars in the silent film with a friend writing the score.  “You just have to make sure that when you put everything together, it lines up,” he said.  Bascombe was looking forward to seeing Colette.

The Friday night gala followed the story of Knightley as Sidonie-Gabrielle Colette a girl from the country who married Willy (West), a well-known author.  Willy persuades Colette to write a novel which she bases on her life, calling the main character Claudine.  The novel’s popularity makes it a cultural success, which, allows Colette’s quest to explore her own identity as a woman, and an author.  It’s witty, funny, dramatic and thought-provoking about the issues of creative ownership, and sexual expression.   Next year’s event will be held from January 24-26. For more information on tickets, and how to get involved visit www.miltonfilmfest.com 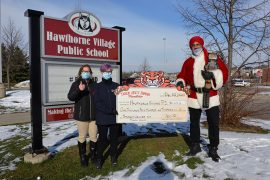 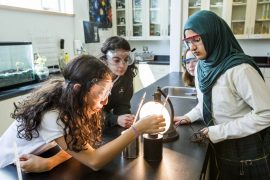 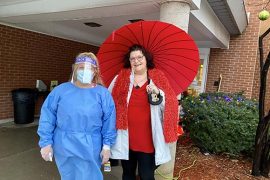