It all began with a camel. In 2013 the Optimist Club of Milton sold plywood camels to local businesses in aid of youth in our area. These camels which local companies purchased and decorated in all sorts of unique ways, took part in a ‘Camel Race’.

The Escarpment Artists Group was formed in Milton to own and decorate a magnificent wooden camel as part of the Optimist’s Camel Drive. After much discussion they named the camel Camelangelo. Hedi Nowak who was then at Harrop House, kindly allowed the fun embellishments to take place there over the summer.

After unsuccessfully losing the race, Camelangelo was stored away in an unknown safe place and subsequently, unfortunately disappeared along with a metal halo and wings, stained glass eyes, quilted saddle and other beautiful adornments.

The mixed group of friends, the Escarpment Artists, all belonging to the Fine Arts Society of Milton, stayed together and continue to show their work annually at a venue in Kilbride. They specialise in: acrylics, beading; fabric; metal; mixed media; pastel; stained glass; photography; watercolour and guitar making. A variety of ages, they are from diverse backgrounds and countries of origin: Canada; South Africa; India; New Zealand; Europe and England. Through laughter, discussion, thought and planning together, friendships were formed. 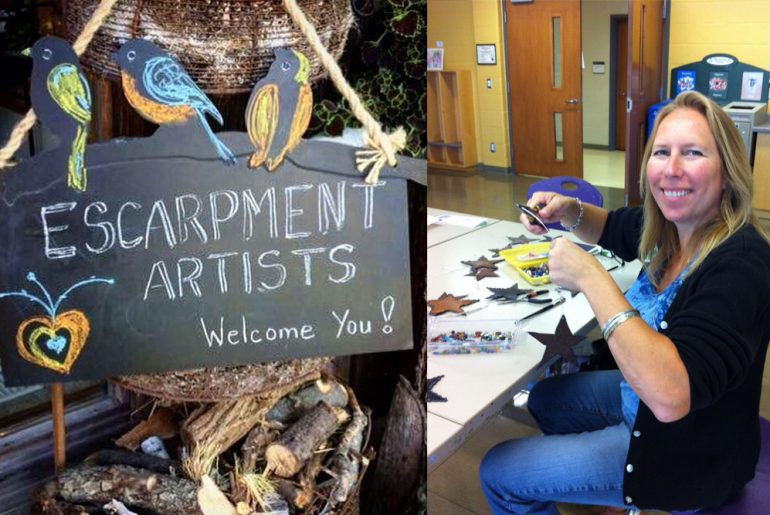 Their artwork involves a vast range of media, technique and vision. They chose the title of the group because of their joint love for the Escarpment and for their artwork which mirrors the natural world. The original members of the group were: Diane Tuszynski, Ursula McDermid, Louise Botha, Aparna Rangnekar, Doris Treleaven, Suzanne LaSalle, Trixy Benner, Bev Hewitt, Janice McDermott, Jean Rivers and Jenny Panda. Several others have joined since the group’s beginning and some have left the group.

Several members of the group annually take part in FASM’s Studio Tour and can also be found in many shows in the area. Ursula Mcdermid became the President of FASM. Aparna Rangnekar has been a major part of the art scene in Brampton as well as in the Milton area. Doris Treleaven has been President of the local POWER group that champions the environment in the area. Most are well known in FASM and in the local community. Their support for the natural beauty of our area should be treasured.

“We love to share the beauty we see in the world.”- Trixy Benner

Ante Up for Childrens Mental Health