The Milton Stags S-Elite girls U15 team is headed to the Ontario Provincials Championships after going 12-1 this season in Ontario Basketball Association games and sanctioned tournaments. The team, which consists of players born in 2008 and 2009, took root in the Milton Stags house league program where many of the girls started playing back in 2016.

“We have always had the goal of competing against the best teams in the province, and this year we get to realize that goal,” says head coach Dan Fratnik. Fratnik, along with assistant coach Jac Villa, have been working together with a core group of girls at the rep level since 2018.

“With each new season, one or two players leave, and new players join our team,” says Villa. “Each of these players help challenge and push their teammates to be better and stronger players and contribute to the overall success of the team.” 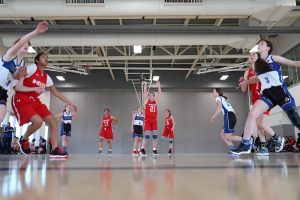 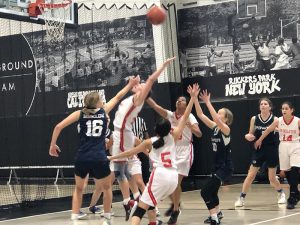 A positive team culture is one of the most important components of the success of this group. “We ask our athletes to come ready to compete, practice hard, play with pride, support their teammates and have fun,” says Fratnik.

The players truly live these values, supporting each other through successes as well as difficult times. They are unselfish with the basketball and bring the best of what they have to offer to the court.

Milton Stags Basketball Program was founded to promote the development of youth in the community of Peel and Halton Region. The club’s goal is to provide basketball activities that offer social, recreational and physical developments. The club is a not-forprofit incorporated corporation and governed by an all-volunteer parents and coaches. Their website is www. miltonstags.com