2019 is the Year of the Pig, known to be a symbol of generosity, optimism and sincerity. This were certainly the mood at Milton Mall as the Lunar New Year Festival took place on February 9th. Te day started oﬀ with members of the Milton Monkeys Kids’ Club making themed crafts and posing for family portraits. After getting their free photos and fortune cookies, families had the chance to watch Chinese art demonstrations and also browse through FASM at the Mall, the in mall art gallery operated by the Fine Arts Society of Milton.

The artistic portion of the day began with the beating of drums. A large audience of all ages enjoyed watching Mayor Gord Krantz and Councillor Rick Di Lorenzo representing the Town of Milton as they carried out the traditional eye dotting and waking up ceremony. Members of the Milton based Dragon Tiger Kung Fu Club delighted the crowd as they came to life and leapt after oﬀerings of food that are thought to bring with them good luck and fortune. Te Lion Dancers led by Grand Master Dr. Jopet Laraya and Sifu Master Dave Ellesmere then toured the mall in search of red envelopes. In Chinese culture, red envelopes are gifts presented at social gatherings and holidays. The red color of the envelope symbolizes optimism and is thought to ward oﬀ evil spirits. Good luck and good fortune were certainly in full force at the event as many mall merchants filled their envelopes with cash and taped them to their storefront. At each of these stores, the lion dancing team stopped to perform and bestow special wishes on the employees. Funds collected were split amongest the groups that participated in the Festival.

After the heart-pounding lion dance, festivities continued as traditional song and dance numbers performed by children and adults of all skill levels captured the imagination of onlookers. 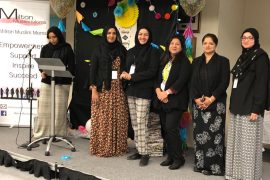 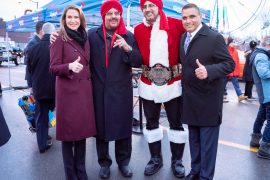 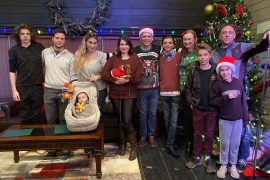