There was much activity in the Milton Sports Centre on Saturday, February 24th. This was not only because of the bustling families enjoying their regular winter skating fun. In and around the Banquet Hall were many more Miltonians getting ready to walk, not just on the track but outside in the cold. It was not really the coldest night ever as it was a balmy 4 degrees and possibly the warmest CNOY walk ever in Milton. Many community helpers enabled the walkers to register for the Walk and handed out brand new 2018 Coldest Night of the Year toques. The walkers gathered in the Banquet hall to meet team members and friends from other groups. Teams were encouraged to compete to see which team could raise the most. However, the most important emphasis in our town is to collect funds for Milton Transitional Housing.

The website of Milton Transitional Housing states that their aim ‘is to help local residents who are in a housing crisis.’ Their goal, ‘from HOPE to HOME’, summarizes their belief that ‘lives can be rebuilt with support and assistance from their community.’ On April 13 and 14, 2018 Miltonians have a chance to participate in the very popular Fashionista Flip which also aims to raise funds for MTH. In her Blog on the MTH site Donna Danielli says: “Fundraisers are so important to what we do, but it is seeing so many happy, smiling faces at events like the Coldest Night of the Year Walk that help keep us motivated and engaged year round. There truly aren’t enough words to thank you all for always being there for MTH and the people we serve.” (miltontransitionalhousing.ca)

After greetings from the tireless, highly esteemed Director of the MTH, Donna Danielli, Councillors John Pollard and Colin Best, the CNOY teams gathered by the door complete with scarves, toques, boots and warm coats, and set out into the cool evening. Several group photos were taken, everyone wearing their best smiles. Then the walk began. The walkers found their own speed and chatted happily as they went. Cars stopped and often honked their horns, occasionally giving a cheer as they passed the crowds of walkers. At the corner of each road were volunteers who encouraged and directed the walkers on their way.

Councillor Colin Best has been involved with the Milton walk for the past four years. He explained how proud he is of his strategically placed “great team of Route Rangers” who stood at “intersections along the routes helping ….to make the walk a success in funding Milton Transitional Housing’s work throughout the year , giving families and individuals a home and hope!” All walkers (2, 5, or 10k) were welcomed back by the volunteers who cheered as they returned. The team members collected delicious hot soup and goodies from the kind helpers and settled in their groups to relax: content and warm. The food was prepared by Audrey Peddie, Liz Gillies and Margot Johnson. Cookies were provided by E. C. Drury and The Flower Shed.

The CNOY website says: ‘By walking at dusk during a cold winter’s night you’ll feel a hint of the challenge faced by those experiencing homelessness during winter.’ On February 24th 2018 an expected 22,000 (walked) together across the country. ‘That’s a big deal, and represents a lot of love. It’s why we call CNOY “Canada’s unofficial walk for homelessness.”’

Mika Takamaki, a helpful spokesperson at the CNOY explained that it is strictly a made in Canada event which originated in Kitchener/Waterloo in the winter of 2011. “CNOY was launched in February 2011 with two walks, in Kitchener and Toronto… Since beginning in 2011, CNOY has helped Canadian charities raise 18 million dollars. Those charities include shelters, transitional housing, women’s shelters, food banks, soup kitchens and youth drop-in centres. In 2018, an expected 23,000 Canadians will be wearing grey toques and hitting Canadian streets in 10 provinces and 1 territory. The walk in Milton helps raise funds for Milton Transitional Housing…. In the 4 years MTH has done the walk, they’ve raised over 185, 000 dollars through CNOY.” 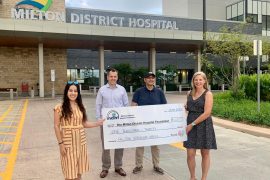 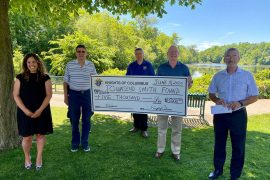 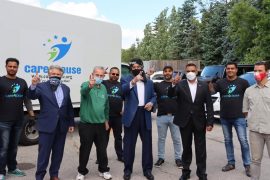