For six exciting hours the “Winning for Health” Milton District Hospital Foundation Gift of Health Gala became Las Vegas North on Saturday, May 4th at the Burlington Convention Centre in Burlington. The theme for the campaign was inspired by Rosanna Conteduca, Chair of the Milton District Hospital Foundation Gala Committee. Vanessa Briguglio, Major Gifts and Community Engagement Officer, shared that “bringing the Las Vegas theme to life was six months in the making.”

The final results of the evening have been tabulated and MDHF announced that this years’ Gala raised $343,000 in net proceeds that will help fund the procurement of medical equipment for the Milton District Hospital adding to the $2.15 million in funds raised at the gala since 2008.

Putting the ‘fun’ in fundraising was front and centre and from the moment that guests entered the Emerald Hall, they were presented with an array of opportunities to try their luck. Blackjack tables, one- armed slot machines, roulette wheels and spin and win wheels drew players and spectators. The soldout event included 330 people seated at 34 casino style tables.

The Vegas vibe got off to an electric start with Layne, Th e Auctionista, entertaining and encouraging gala guests to try their luck, to bid for a bountiful assortment of silent auction items donated by individuals, businesses and artists with bidding made easy by entering bids on the ‘Givergy’ tablets placed at each table.

Later in the evening the live auction items took centre stage. Th e slate of auction items included nine premium packages including a Vegas trip for two including show and airfare credit, a Toronto Maple Leafs Scotia bank Box for eight people, a Toronto Raptors Game Box for 20 guests as well as a host of date-night dinners at local Milton fine dining establishments to name but a few of the items up for bid.

During a sumptuous dinner, the audience was serenaded by Milton’s own Alexa Frankian, a young chanteuse with operatic ambitions, who recreated the soaring songs of Celine Dion’s Vegas residency.

What Vegas event doesn’t include Elvis? That role was fi lled by another Miltonian, Steve Michaels, who has made a long and successful career internationally as an award-winning actor/singer/ tribute artist who has even taken the stage with former members of Elvis’ band.

Tyler Fergus, another Milton celeb, entertained the crowd with his magical illusions and DJ Rob Hewlett, aka Rockin’Rob, set the mood for dancing as the evening wrapped up.

“Winning for Health” brought out the generosity in gala participants, sponsors and volunteers while contributing to the long-term goal of quality healthcare for the Milton community. 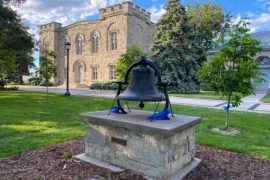