On May 9th the honorary Prime Minister, Justin Trudeau was in attendance at an Iftar dinner at the Milton Banquet & Conference Centre to break fast alongside members of Milton’s muslim community. This festive Iftar dinner was organized by the, “Canadian-Pakistan Foundation of Friendship” (CPFA) with over 300 people attending the exclusive event, displaying the strength of the Pakistani Muslim community in Milton. This exclusive event also hosted the presence of multiple  members of Parliament, politicians and businessmen from the Greater Milton Area (GMA), connecting and socializing with the community.

Th e Prime Minister who is recognized for his efforts for the members of migrant communities and minority faiths, took this event as an opportunity to address his respect and recognition of efforts of the Muslim community in Canada. He said, “Ramadan honors the values at the heart of Islam – like compassion and service to others.” A highlight of his speech was when he addressed and shamed the concept of Islamophobia in a diverse country such as Canada, this statement was well appreciated by those in attendance.

“It was delightful meeting a humble respectful person, our Prime Minister Trudeau. Thank you Tasneem and Adnan for inviting us.” said Miltonian Shumaila Ali who attended the event with her husband Ali Irfan.

At half-past eight everyone opened their fast in the hall followed by a photo session with the Prime Minister himself. Justin Trudeau took the initiative to attend every table in the vicinity to take pictures and chat with attendees.

As the sun set over Milton’s escarpment, the cultural night came to an end. The following day, Justin Trudeau posted a statement on his Facebook account expressing his gratitude towards the invitation to the event as he said, “Ramadan is about the values we all hold dear as Canadians – compassion, peace, and serving others. Last night, I joined members of the Muslim community in Milton to break fast – thank you for welcoming me to this special Iftar meal.” 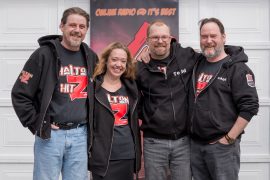